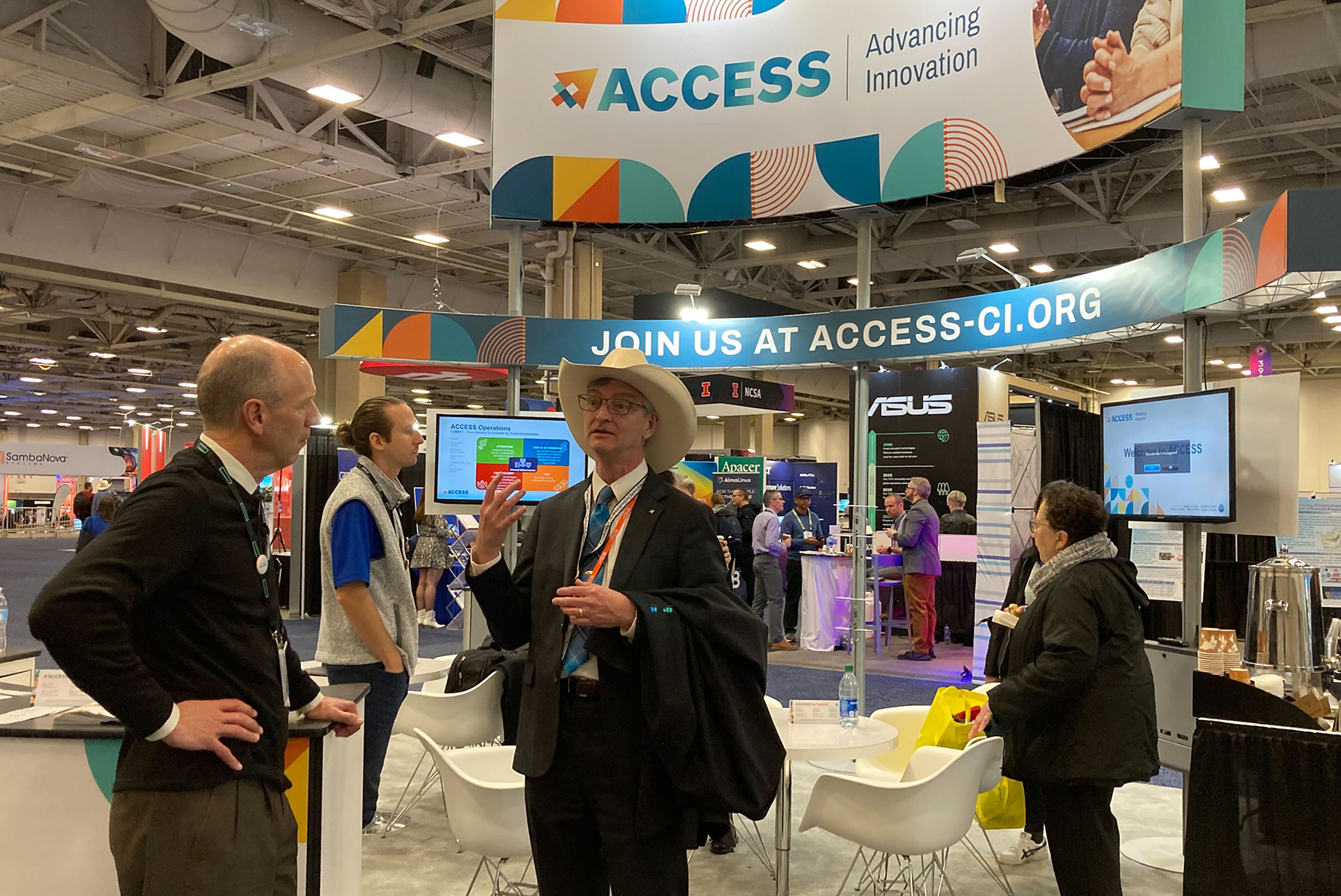 The ACCESS team worked hard to get ready for our debut at Supercomputing Conference 22 (SC22). Months of planning and organizing led to an eye-catching booth and a team of experts staffing it to answer questions from conference attendees. The slick, simple design of the booth stood out on the packed conference floor, with the bright, recognizable ACCESS branding and the approachable layout of the booth and furniture conducive to conversations.

Members of the ACCESS team answered questions throughout the four days at the booth and had a number of positive interactions and great questions about training, Campus Champions and allocations. In the coming post-conference weeks, the Coordination Office, which organized ACCESS’s SC presence, will be routing those questions to the right experts for follow-up.

Distinguished speakers with decades of supercomputing experience lent their time to answer questions about ACCESS, including program principal investigators and Tom Gulbransen, the NSF ACCESS program director. Kicking off the ACCESS the Experts speaker series at SC22, Shelley Knuth, PI for the ACCESS Support team, answered questions Monday night at the opening exhibition hall reception. She spoke about ways people could contribute to ACCESS. “We have a number of pilots underway,” including ACCESS OnDemand and Pegasus, that you can get involved in, she said. She also had an exciting announcement to share with everyone about the launch of a new program: CSSN Community Participation Program (CCEP) is now live.

You can earn travel support rewards by contributing to the ACCESS Knowledge Base, joining committees or becoming a mentor.

On Tuesday, Tom Gulbransen was the keynote speaker for the Leaders Talk ACCESS. Gulbransen and several ACCESS PIs had an informative question-and-answer session immediately following the talks.

One of the panelists, Stephen Deems, ACCESS allocations PI, provided information about what was involved with becoming an allocation reviewer. “We’re always recruiting allocation proposal reviewers,” Deems said. “No travel involved; help out from the comfort of your home or office.”

All of the ACCESS teams were represented by senior experts at SC22 this year. ACCESS Operations PI Tim Boerner spoke about engagement, which includes the Student Training and Engagement Program (STEP) program. “We’re looking to expand the way we think about engagement, audience and participation,” Boerner said.

ACCESS Metrics Co-PI Abani Patra chimed in with some practical advantages to using ACCESS for your research. “Users have the ability to take data offline. Which, if you’re like me, is fun to take the data and play around with it,” he said.

Between presentations and panel discussions, John Towns, PI for the ACCESS Coordination Office, had a busy schedule during SC22. But he made time in his schedule to pick up the HPCwire award on behalf of the XSEDE project and to talk to conferencegoers about ACCESS.

Towns said ACCESS is a huge project and coordinating everything isn’t easy. “There aren’t many projects like this that are out there,” he added. Community building across the nation’s cyberinfrastructure ecosystem has also been a focus – disseminating information and receiving feedback from ACCESS stakeholders, partners, and the community at large, according to Towns.

He also spoke about the recent and highly successful open nomination period for the External Advisory Board (EAB). “We’re in the process of finalizing the EAB now. We received a large number of nominations. Even though we’re only selecting nine members, there are many other opportunities throughout the project for others to get involved as well,” Towns said.

ACCESS is proud to be a part of the Supercomputing Conference and looks forward to SC23 in Denver.